Skip to content
You are here
Home > Foodie > We Pound Love!

Did you know that Pound by Todd English has just opened another branch in Ayala Vertis North? We were ecstatic when a friend invited us over for a casual dinner last month where we got try their $1 solo dish promo, among other things!

Home to some of the best burgers in Metro Manila, Pound by Todd English has since expanded from its original location in Taguig, to SM Megamall, among others areas, and now, in the newest mall in Metro Manila – Ayala Vertis North.

We’ve visited Vertis North a few times, bu tit was the pre-Pound days. Now, we’ve got another reason to go back since we like the chill vibes of this new mall.

Nowadays, there are only few things you can buy with $1 or Php 50. Would you believe it could now buy you a delicious burger, pasta, or a solo serving of goat cheese salad?

Pound by Todd English recently had its $1 promotion for selected items which we shared on our social media channels at @SeastForTwo, @LivingMarjorney, and @JonelUy.

We tried the $1 slider burgers and it was as good as the big ones! It’s the same goodness and quality that Todd English delivers.

I was about  to say it’s a “bite-sized” burger, but honestly, it took us about 2 to 4 bites before we actually finished the solo-sized burgers because it’s thick – aside from the patty, the sliders also had lettuce, tomatoes, cheese, and more depending on which variety you ordered.

For the mains, we had a skillet of freshly cooked, tasty, huge cut Truffle Fries topped with cheese and the Pound Foie Gras Burger!

Both are highly recommended by Seats For Two as the former makes your good ‘ol favorite fries even better with the truffle falvors. One of the prime examples of making good comfort food even better!

For the latter, it tasted as good as it sounds! The combination of the juicy patty set on a bed of caramelized onion and the soft foie gras is heavenly, to say the least.

It’s a definite order for burger-lovers!

The pasta duo we ordered next was also up to par.

The Spaghetti Pomodoro came in a light flavor that’s just the right balancing sweetness and the natural tomato flavors.

But what we liked more was the Alfredo Pasta. Its white, creamy pasta sauce came as a surprise!

Finally, we ended the night chilling with a bottle of old fashioned Ginger Ale!

Overall, it was a great dining experience at the newly opened Pound by Todd English in Ayala Vertis North.

Days after, we brought some relatives over and treated them to the other dishes included in the Pound $1 promo. 🙂 (talk about cheapskate relatives like me!)

We hope that Pound by Todd English would bring back the $1 meal and when they do, you should not miss it!

3 thoughts on “We Pound Love!” 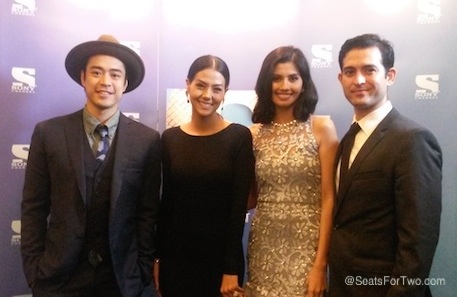