2018’s Ang Huling El Bimbo brought us to a trip down memory lane which featured beloved songs from the most iconic ‘90s Filipino rock band, Eraserheads. It was so good, so it’s back!

The demand to see the show was so high that despite having additional show dates to the original run, many theater and music fans were still unable to get tickets.

This is why on its 10th year, Resorts World Manila is giving you – their audience, another chance to catch Ang Huling El Bimbo at the Newport Performing Arts Theater from March 1 to April 6!

Last year, we watched Ang Huling El Bimbo The Musical during the Gala Night and we enjoined a couple reader of Seats For Two to join us, Rachelle and her husband. Similarly and as expected, they enjoyed the show as we did!

Here’s a snap from one of the scenes allowed to be captured (cameras are strictly prohibited and event he media were only allowed on certian scenes).

As mentioned above, Resorts World Manila is bringing back the well-loved musical, Ang Huling El Bimbo this 2019!

Many of the original cast members will be reprising their roles, including Gian Magdangal, OJ Mariano, Jon Santos, Reb Atadero, Boo Gabunada, Bibo Reyes, Tanya Manalang, and the First Lady of Philippine Theater herself, Menchu Lauchengco-Yulo.

Joining them is a new set of actors who will bring their own brand of energy to the play – Nicco Manalo, Lance Reblando, David Ezram, Phi Palmos, Myke Salomon, Rafa Siguion-Reyna, Gabriella Pangilinan, and Carla Guevara- Laforteza.

The team will also be joined by writer-director extraordinaire Floy Quintos for the second run.

“Given the huge success of the first run, we wanted to ensure that the audiences will still be treated to all the best- loved songs as in the original, save for a few tweaks in aid of a more streamlined storytelling,” says Lauchengco-Yulo. “It’s an even more amazing show now for those who will see it for the first time, and these changes will bring an added dimension of enjoyment for those who have already seen it before.”

Special show promotions are available to Resorts World Manila members through the RWM Mobile App which is available for free download via the AppStore or GooglePlay.  (Guests who are 21 years old and above may avail of free RWM membership to qualify for RWM Mobile App promotions.)

Show tickets  are available at Ticket World (www.ticketworld.com.ph) and the RWM Box Office at GF Newport Mall in Resorts World Manila. Call the Tourist/Visitor Hotline at (02)908-8833 for booking and inquiries.

See you in March at the Newport Theater in Resorts World Manila! 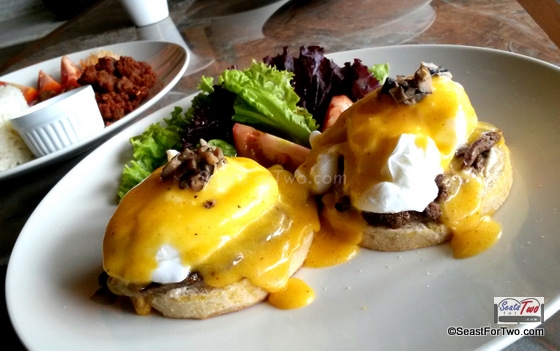 Meal For Two on Valentine’s Day