Tokyo Bubble Tea is one of the pioneer milk tea brands that was already in the market when the milk tea craze started in the Philippines.  They were one of the few that offered real quality milk teas, not just riding on the fad, and restaurant dishes as well.

I frequented their Timog branch then, with some friends, a number of years ago. Then I moved to Makati City at the same time during the influx of other milk tea brands. It reached a point in time when there were gazillions of choices; milk tea shops in almost every corner of the metro’s busy streets. It’s good to know that Tokyo Bubble Tea remained true to its commitment of quality milk teas and food.

After getting married last year, me and my wife moved back to Quezon City and we now frequent their SM North Edsa branch at the ground level of SM The Block. Our most ordered milk teas are the Royal Milk Tea and the Taro Milk Tea. The former is hers while the latter is mine (plus extra bubbles). :p

Late last year, I got to visit one of their newest branch – Tokyo Bubble Tea Katipunan – with food blogger friend Sumi of ‘The Purple Doll‘. It was there where we encountered their ‘Flat‘  Technology Tables, a patented technology from Australia, which automatically stabilizes dining tables eliminating a prevalent problem in the hospitality industry – that of having ‘wobbly-tables‘.

Hence, the result was a wobble-free and stable lunch! It’s something every restaurant should have, I think. 🙂 The place was also huge shared adjacent to its sister restaurant called “Honey Bee Patisserie‘ . They have a second floor fit for big functions and there was ample parking space too!

So you can just imagine our excitement, when Seats For Two received an invitation to try some of Tokyo Bubble Tea’s best-seller entrees this season!

So here are some of what we had:

The Nippon Ebi Maki was a good starter for a soft and chewy appetizer.

The Samurai Burger can get a face-lift in terms of presentation. But once you have taken a bite, you wouldn’t mind how it looks like as the taste makes up for it. I would compare it to the chorizo burger in Boracay – yummy, tasty, and juicy!

The Omurice with Steak Mushroom gets our highest recommendation in this set.

If you can only choose one to order from the list of foods in this article, this would be it. It’s a full meal in itself and very delicious. The  combination of the Hamburg steak, egg, and rice makes it a potentially favorite comfort food; the mushroom sauce enhanced the taste even more.

The Bibimbap is also very good, but I would be biased – I always love Bibimbap. It’s my favorite Korean dish sans the spicy variants.

Beyond the milk teas, it was a feast of eye-popping and sumptuous dishes. I sound exaggerating but I’m not. If you had tried dining in Tokyo Bubble Tea at least once, you know what I mean. It’s good to know that they haven’t sacrificed their devotion to serving quality food.

Honestly, the prices of the dishes in the Bubble Tea menu are not cheap for the average middle-income earning Filipino, but they’re not too expensive either. Think of it this way – what you are paying for will be worth it.

On the average, you could get a decent dish at P200+ which is already good for sharing with 2 to 3 of your friends. The serving sizes on the photos above are huge! Add a good drink (perhaps milk tea, right) to go with it, some rice, and viola! A good filling meal may cost you P300+ per head on the average.

Tokyo Bubble Tea Milk Tea Place & Restaurant is  also celebrating the Sakura Season wherein cherry blossoms are in full bloom in Japan. There were pink Japanese lanterns painted with cherry blossom designs hanging around the place and a life-size cherry blossom tree to highlight the event.

Together with this theme, they also introduced new milk tea concoctions to go with the celebration. You guessed it right – Cherry Blossom Milk Teas (P145-M, P155-L)! It’s a dreamy combination of green tea, milk, and hint of vanilla added with aromatic cherry essence for the romantic vibe of the Sakura season.

Just like Seats For Two, good things come in pairs. The second variant is the Sakura Milk Shake which I like better than the milk tea variant. The medium size costs P165 while the large one is P175.

And to complete the meal and end it in a sweet tune, we had a pink cake called Sakura Mango Roll and some chocolate cakes for dessert.

Indeed, it was good to be back at Tokyo Bubble Tea Katips. Katipunan may be a tad far from where we live but there’s always the SM North Edsa branch near us. 😛

2 thoughts on “Going Back to Tokyo Bubble Tea Katipunan” 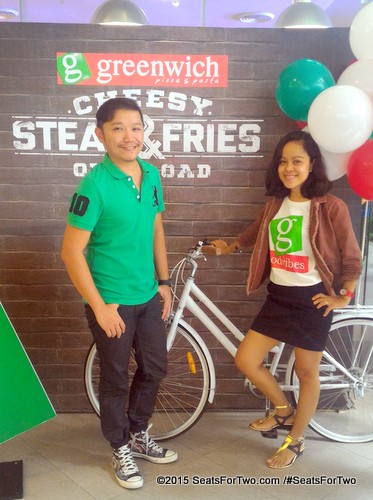