It was an awesome fine-dining Chinese date last week as we finally got to visit Paradise Dynasty Manila in one of their newly opened branches at the Podium Mall in Ortigas, Mandaluyong City.

It’s been quite a while now ever since we wanted to try out Paradise Dynasty when they first opened in the Philippines but wasn’t able to push through due to schedule conflict. But stars-aligned eventually pointing to paradise, a food paradise, that is.

And what made it better was that we dined with a group of friends so we ordered A LOT!

Aside from the usual-sized tables, the restaurant offers the traditional Chinese fine-dining experience with round tables fit for big families or a group of 12 or more with the typical lazy Susan to allow easy sharing of food.

So, we ordered them to try.

We highly recommend you get the set which already has all eight colors/variants of the Xiao Long Bao (P 388) flavors namely:

How to Eat a Xiao Long Bao

For the uninitialted, you may use a chopstick to pick it up from the curled tip and support the bottom with a soup spoon.

It would be interesting to note that the restaurant provides a small leaflet containing instructions on the preferred way to consume the set for beginners.

Seats For Two suggests that you start with the original flavor and in numeric order (based on the leaflet), down to the one with the most distinct flavor, the Szechuan Xiao Long Bao.

In particular to our preference, the truffle and ginseng Xiao Long Bao are among our favorites. Ginseng is known for its many health benefits while truffle is known for its exquisite taste. On the other hand, you may also order a single flavour basket (eight pieces) that you like.

For first time Paradise Dynasty diners, we suggest having the variant set so you could try everything.

After the Xiao Long Bao appetizers, of course we ordered other Paradise Dynasty dishes.

Since we ordered a lot, we featured them on  a separate article on NomNom Club food blog; check out the other dishes and appetisers of Paradise Dynasty!

Nonetheless, we maintained the desserts here for good measure and for your eyes to feast on. 🙂

The Glutinous Rice Stuffed in Red Dates can actually be part of the main course and is not technically classified as a dessert.

Nonetheless, due to its sweet inclination, we recommend it as a dessert. One of our Chinese friend in the group gave us a tip that these dates come in as a handy partner for the  Poached Beef in Szechuan Oil dish as the dates can counter the chili oil’s effect!

We’ll definitely be back at this Podium branch since it’s near to our place! You can also visit their other branches in S Maison beside Conrad Hotel and other branches ot open soon!

Keep updated on the activities we did in Australia by tuning in to Seats For Two for by subscribing to our blog through email and liking the Seats For Two Facebook Page. Follow our Twitter and Instagram accounts too!

Paradise Dynasty is one of the new exciting food destinations in Metro Manila when it comes to Chinese / Asian food. Visit them at their branches in the Philippines specified above! 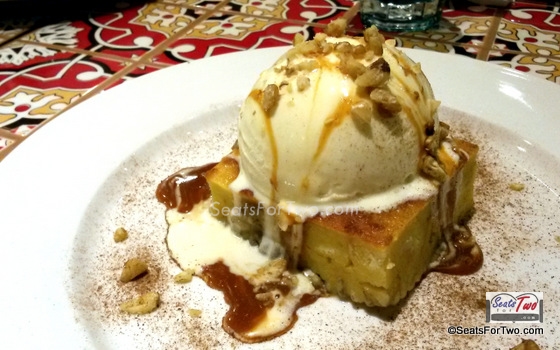 Your Taste, Your Way @ Chili’s